Guess how much Lola Glaudini spent on her jean jacket? Guess. Or better yet, keep reading to get the whole story…and then, dear denimheads, promise to always do as Lola did and pay the “premium” when you find the perfect piece. This story is proof that it’s worth it.

Chances are you recognize Lola as Elle Greenaway from CBS’s “Criminal Minds,” or from “The Sopranos,” where she played undercover FBI Agent Deborah Ciccerone-Waldrup. This summer, Lola will appear as Captain Shaddid in the Sci-Fi Channel’s new series, “The Expanse,” which takes place in 200 years in the future and is, she says, “more Blade Runner than ‘Star Trek.'” At the moment, though, Lola is busy running the e-commerce site she just launched with her husband, jewelry designer Stuart England. Check it out – SEAtelier.com, which went live in early November, sells silver and bronze versions of Stuart’s magnificent, handmade pieces (formerly available only in solid gold). See the rings that Lola wears in the picture above? And the lettered necklaces she’s wearing below? All Stuart’s doing, and pretty damn chic, right?

But back to the jacket, which Lola often turns to to keep her look casual. “I have a tendency to be over dressed. I know this about myself, but sometimes at the butcher or the playground, I want to take it down a notch,” she says. “I love the way this jacket levels out whatever kooky concoction I’ve drummed up.” As for her jeans – A.P.C.s bought in NYC back in the day – they’re “classic and unbranded, worn with love and without effort,” she says.

OK, start by describing your jacket for me…

It’s a kid’s denim jacket, probably from the late 70s/early80s. It has terrific whiskering and brown dirt creases from years and years of wear, long before me. I love the way the snaps make it really tight around the rib cage and waist.

How long have you had it? 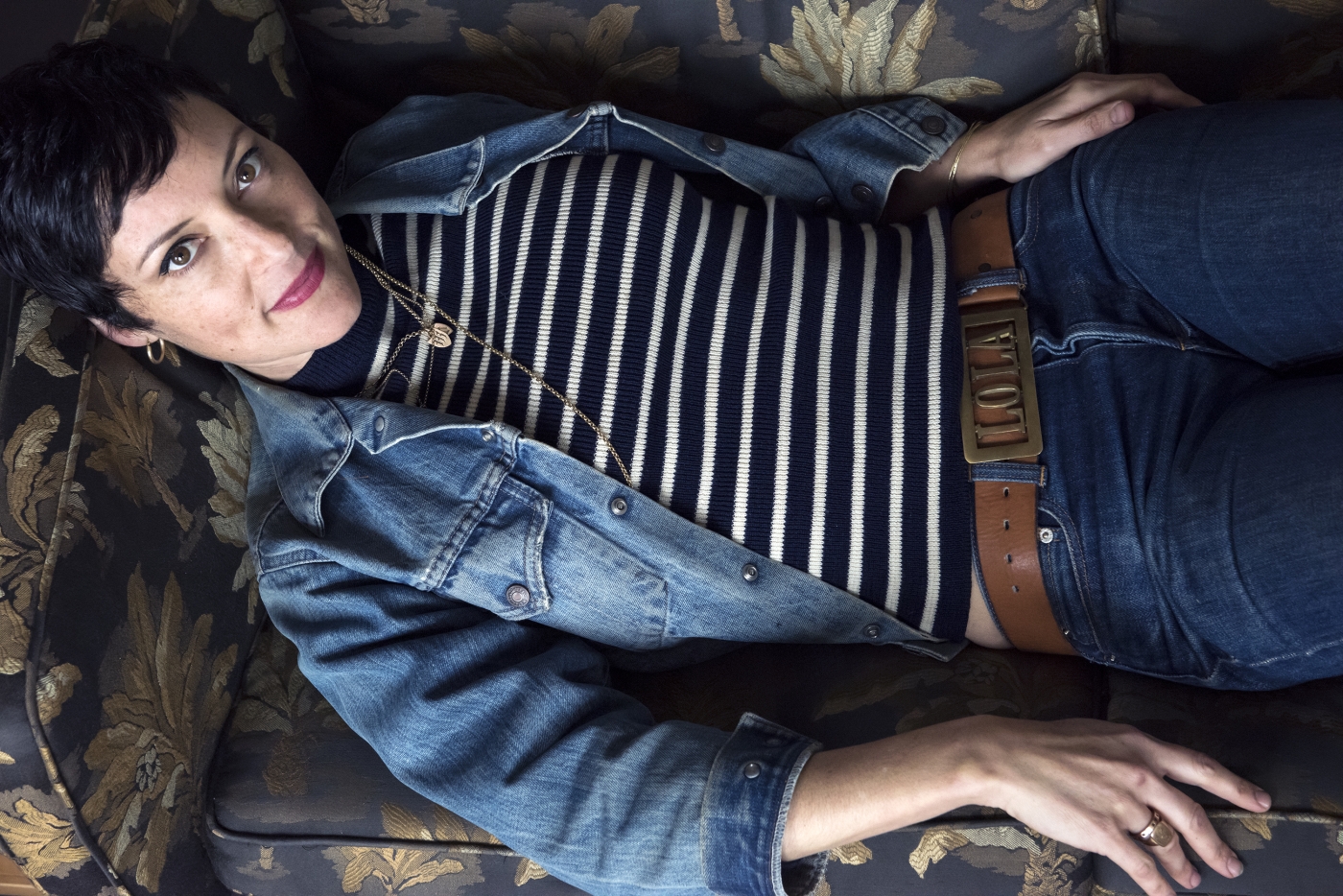 LAID BACK Lola wears necklaces made by her husband Stuart England. Her belt is from a now-closed shop on 8th Street in NYC.

What about your jacket initially spoke to you, and why do you love it now?

This jacket taught me a lesson I carry with me and think about all the time! Seriously, it’s about being present, in the moment, and not being an asshole. I am a yard sale enthusiast. My mom moved to Sonoma, CA about 15 years ago where the yard sales are epic. Prices are still what they should be, and there you see the greatest houses and orchards and vineyards and meet such nutty characters. I’d been wanting an old Levi’s jean jacket for a while…I often try manifesting the item I am setting out to find. That Saturday morning, we left to “go sailing” (as we call it; get it? Sale-ing. Sailing.) I thought about and pictured a small, Levi’s vintage jacket. Sure enough we end up at this sale where everything is in big piles across an acre of grass. We’d been out a few hours already, I was digging through a pile, and I could just feel it – my throat got tight, I started digging faster…and then I saw it. I pulled it up, tried it on and was stoked. I went up to the woman who was selling and asked the price. She said ‘$3,’ and just out of knee-jerk yard sale sport, I asked, ‘Would you take $2?’…she very nicely said, ‘No, I want $3 for that,’ and walked away. I put the jacket down and walked back to the car to leave. After a beat, I said to myself aloud, ‘Wow. You’re an asshole. What are you doing?’ And so I went back, picked it up and gave her the three bucks. I almost lost out on my favorite jacket over a dollar, just out of habit of the haggle… what was I thinking?!

I don’t do that anymore.

Good denim is always worth the extra dollar! So, if had to give your jacket to anyone right now, who would you give it to?

My sister, Isabella. She always gets why things are special.

If it had a theme song, what would it be?

Suddenly MIA’s song ‘Airplanes’ popped in my head…I guess it has that empowerment feeling. (‘If you catch me at the border I got visas in my name.’)

Have you ever lost it for a time? Where was it, and how did it find its way back to you?

Yes! A few times! Recently, I was at the Ace Hotel in L.A. and I left it in the restaurant. I drove back an hour later and they told me it was ‘in the hotel’s main safe, for security’ (seriously!). I also lost it for about a year when I moved from Manhattan to Brooklyn, and then it turned up in a random box I’d neglected to unpack.

Has anyone else ever worn it?

A kid’s name, Joshua, is faintly visible in marker inside, under the collar, so I guess I have him to thank for breaking it in.

What’s the happiest ending you could imagine for the story of your jacket?

My son giving it to a girl he loves.

OK, now your jeans…describe them for me in one word.

What do you love most about them?

The bum is juuuuuust right…all the seams sort of “frame” the bum..

Where did you get them?

I think I got these at the original Steven Alan store when there was only one and Steven Alan was the only place in NYC carrying A.P.C. Wasn’t that even before the Mercer Street store opened? I think. I’ve bought a lot of A.P.C.s over the years, so I could be foggy, but this particular pair is certainly from the first wave of A.P.C. in NYC.

How long ago was that?

At least 15 years. Sadly these used to be my ‘fat’ jeans. They were sort of loose and baggy. You know, when I gained a few I’d wear them and then when I was back down they were my slouchy, comfy jeans. I recall I actually referred to them as the post-baby jeans I could fit in… yeah, well, now they are just my jeans.

What’s the best place they’ve ever been with you?

What’s the weirdest place they’ve ever been?

Various men’s rooms, probably. I use the toilet with the shortest line.

Tell me the first memory that pops into your head when you think about you’re A.P.C.s?

Immediately taking them to a tailor and getting them cropped at the ankle when I bought them – at a time when extra-long, worn-through hems were in vogue. Remember when people would have denim tails trailing their feet? That era.

I do remember that. Ok, if your jeans could talk, what would they say?

If they had a zodiac sign, what would it be? And why?

Virgo because they have to be cared for ‘just so.’ 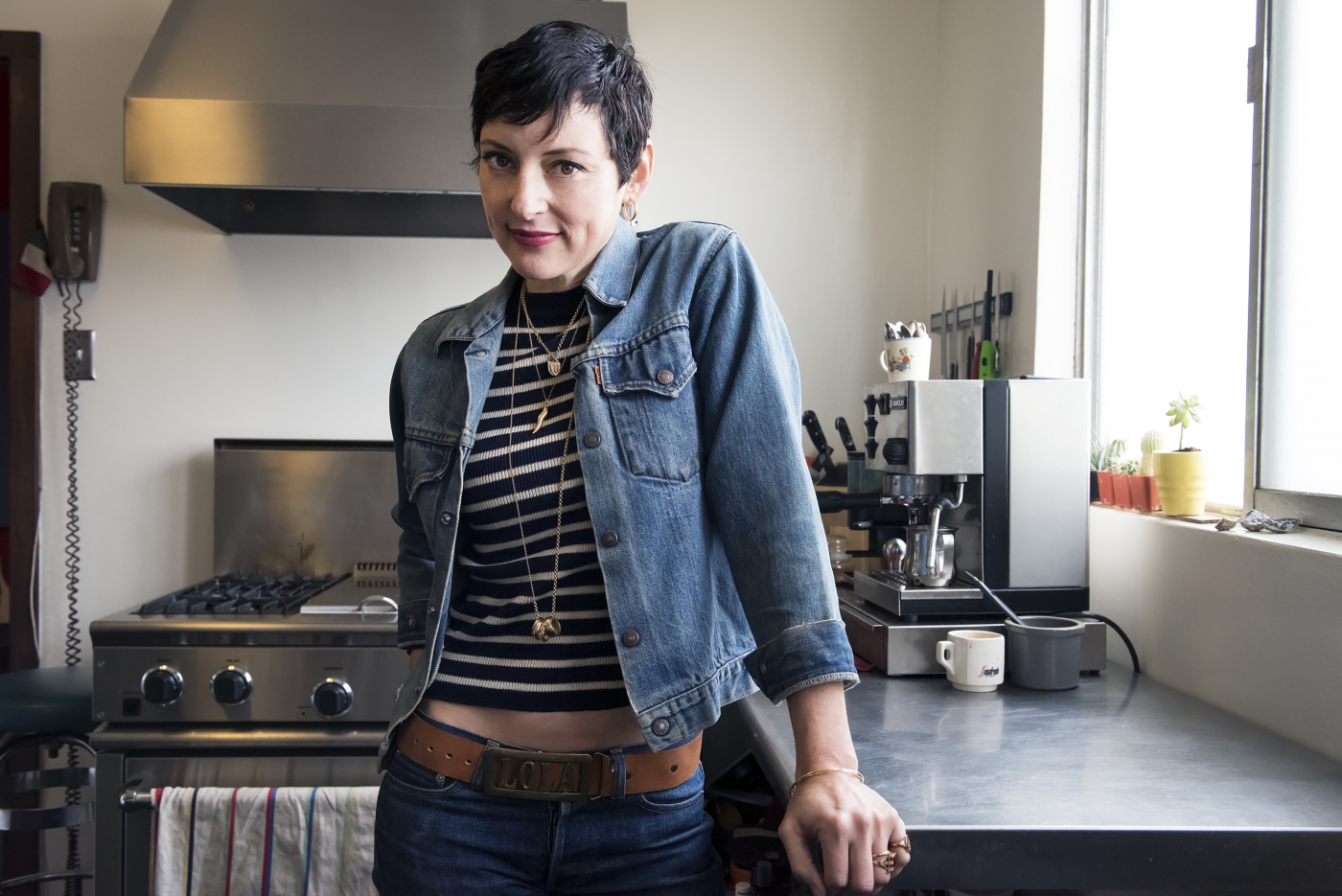 What do your jeans know that no one else knows about you?

I only buy black or nude colored underwear. (Though in truth that’s not a fact ‘no one’ knows…)

If you were to take them anywhere in the world tomorrow, where would you go?

How do your jeans help you do what you need and love to do on a daily basis?

I love to cook. I cook every day and I always end up wiping my hands below my hips and bum. So a good patina of grease stains in just the right places has evolved.