Bonus points if you can name the superstar who wore the vest Adam Selman is wearing here in one of her music videos – and extra credit for the song. Okay, it was Rihanna in “We Found Love.” Who doesn’t know that Adam is her incredible costume designer? Along with making his own ready-to-wear line, and creating costumes for clients like Lorde (he did her recent tour) and the inimitable Amy Sedaris. But RiRi’s only one part of this vest’s story… Adam bought it several years ago on eBay from, ironically, a Canadian seller. And who knows who cut up an American flag and sewed the pieces to a vest, or why or where? If this vest could talk… Since owning it, Adam has worn it every Fourth of July (to find out what he pairs it with, read on).

When we arrived at the designer’s Greenwich Village apartment (shared with his boyfriend, Mel Ottenberg, who is Rihanna’s stylist), he was wearing the vest with majorly oversized jeans that were patched up and repaired many times over – not by him; they came that way – and that were being held up by a bandana tied through the front belt holes. This is his signature. The jeans were so big on him, and always have been, but they looked so good – completely him. Adam wore a white tee that, when he pulled back the front of his vest, had the word “Daddy” (it’s a nickname) and a tiny little heart embroidered in red, and Chuck Taylor’s.

We hung out in Adam and Mel’s den, which is the kind of place you could spend a couple of hours in just studying the artwork. You could be looking at some amazing romance novel cover art (in which the lovers are wearing jeans!), and then your eye moves over to a Cindy Sherman (another client). And we talked about how denim plays a role in is life (more below) and in his own collection (check out our Get the Look). He hasn’t made jeans…yet – just pieces he calls ‘denim non denim,’ such as the linen looks in a jean-ish blue in his SS15 show, for example. But when he does, wow, we’ll be there.

Tell us about these big jeans you’re wearing…

I got these at Search and Destroy. I was looking for jeans, but not for myself. And then I saw them and they were like 15 dollars. And then they sat in my closet for about six months and next thing you know I’m wearing them every day, even though they’re the most unflattering pants.

Why did you have to have them?

I had to have them…I just love that whoever had these before did not want to let them go. All the love, and the stitching. There’s obviously emotion in these jeans.

What brand are they?

I think they’re so destroyed that you can’t tell who made them. [Later on we spotted a Lee label on them.]

How often do you wear them?

What kind of reaction do they get from other people?

In the studio, people get a good laugh. I’m on a Citi Bike most of the time, so people usually don’t get too good a look.

You’re holding them up with a bandana!

I’m not a big belt fan. I wear my pants a little bit bigger and cinch them here [gestures to TK].

That’s handy. Where did you pick up that trick?

In kitchens. I used to be a handyman for restaurants. You’d take a plastic bag and wrap it a bunch of times to tighten your pants because you’d be sweating so much. I thought, Oh, maybe I could do that with a bandana. I used to wear skintight head-to-toe denim everywhere. But I turned 30, and it was like…

What were the skintight styles?

Levi’s 505s. The Orange Label. I have a massive collection.

Where did you find them?

Rags-A-Gogo. They’re organized by size. And then there’s a store outside of Waco – I’m from Texas [Belton] – called the Style Station, and they just have stockpiles of Levi’s. Like deadstock jeans.

What about your vest, tell us about it…

I bought it maybe ten years ago. It was in the early days of eBay. And it was from Canada, which was the best part. Somebody chopped [the flag] up. So I wear it every fourth of July with the tiniest pair of denim shorts. I think it cost, like, $8.

Where do you like to go for the 4th?

Wherever someone will have me. It’s my favorite holiday. This year we went to Brooklyn, to a friend’s rooftop.

So you bring this out once a year?

And you’ve got your Chucks…

It’s either these or army boots. I get them from Uncle Sam’s on 8th street. Can’t go wrong with $30 shoes. Maybe you can, actually [laughs].

Who makes your t-shirt?

This was a gift actually, from someone who worked in my studio. She got a new job. Everyone in the studio calls me Daddy [laughs]. I think it’s just a Hanes t-shirt that she embroidered.

How did that start, people calling you Daddy?

Good question. I think it’s because I’m the boss, but I’m not like a strict boss. Everyone’s like, “Ask Daddy.” It was pretty mortifying – I went to B&J Fabric once and I walked in – my assistant usually goes – and they were, like, “Oh, you’re Daddy!” I was like, “Oh my…” [laughs].

Do you remember the first pair of jeans you ever had?

I do remember that I wore a pair of Girbaud jeans growing up. I begged my parents for them, and then finally they bought me a knock-off pair.

What jeans did you wear as a student at Pratt?

I always wore cowboy jeans. I’d do Wranglers and then take them in so they weren’t as boot cut. And then I went through that phase where I’d slit open the sides and sew a panel of fabric in, so I’d have these obnoxious bell-bottoms. Guilty as charged [laughs].

When it comes to designing your own collection, what place does denim have?

I’m not ready to do denim, because I want to do it the right way. For this season [spring 2015] I did what I call ‘denim not denim.’ I did a linen ‘denim.’ And I did overalls. And tweed that was a denim color.

Where do you see denim’s place in fashion?

It’s a uniform of sorts – and something that never goes out of style. And there are so many different types, and so much denim. I think we’re still figuring it out, too, which is exciting.

Who has the best denim style?

Maybe Peter Berlin, just because it’s so iconic. It’s exaggerated, so in your face. 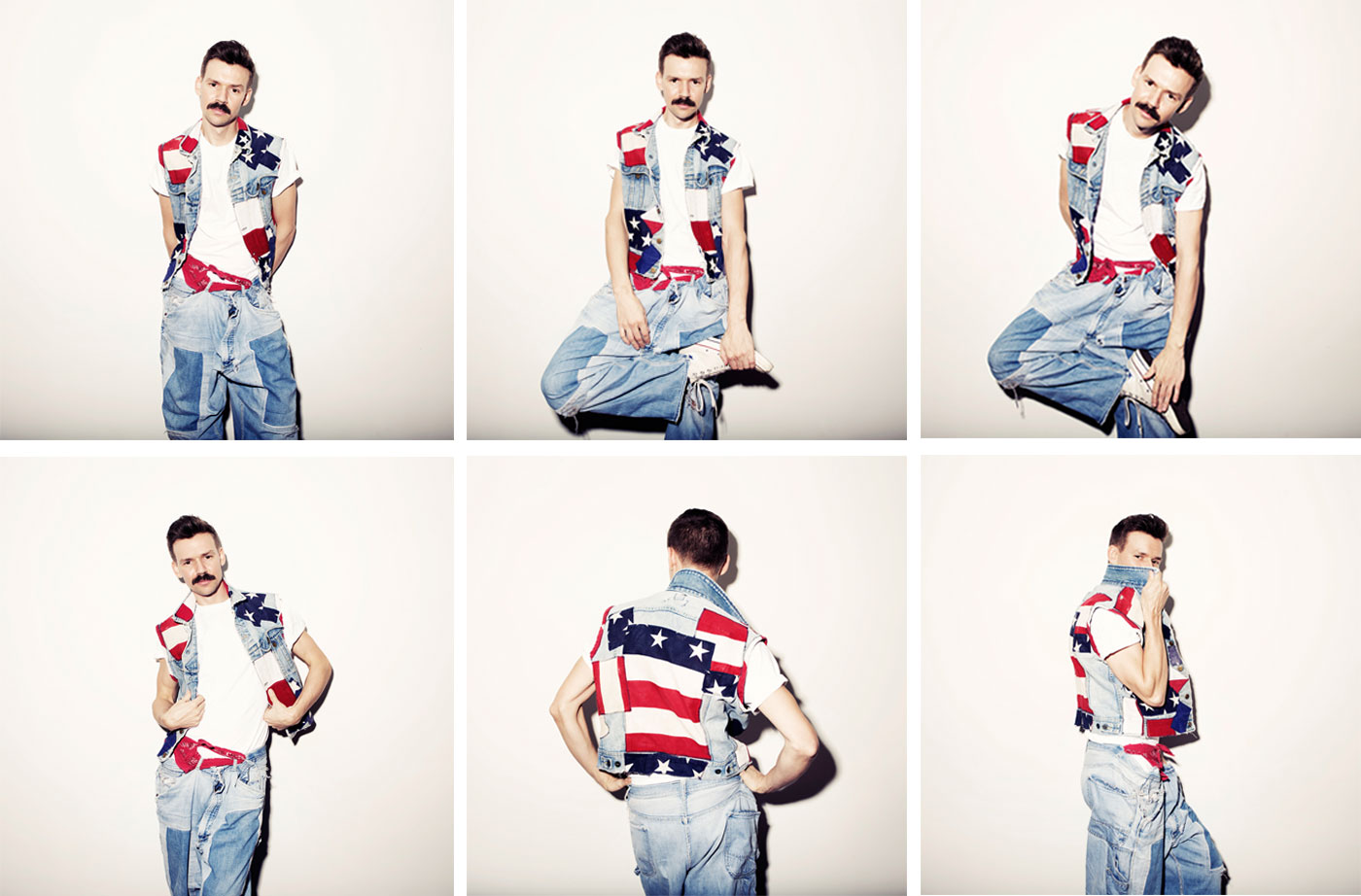 Describe your jeans for us in one word.

What do you need your jeans to be always?

If they could talk, what would they say?

What would they say about you?

That I’m a creature of habit. I like to wear the same rotation of outfits. If I could do a Monday through Friday outfit – different day of the week, a wild card – I would do that. Like those panties that girls used to have [laughs].

What’s the most memorable place your jeans have been?

This vest was in the ‘We Found Love’ video, so Rihanna wore it. The jeans? I wore them to a meeting with Mick Jagger. He was doing this project and I was up for it. I wore tight ones to the first meeting, these to the second. I figured if anyone’s going to get scared by them it’s not him [laughs].

No, he was very straight-faced about everything.

Who besides you has worn them?

I think I’m the only one – other than the person who had them before me. I almost cut them up for a project. Some random Rihanna project – one of the many thousands [laughs].

Was there ever a pair that got a away.

Definitely. It was an old pair of Carhartt jeans. Someone had worn them beautifully. They were at a flea market and it’s one of those things where you turn around and you’re thinking…and then you turn back around and someone has taken them. Noooooo!

They probably grabbed them because they saw you had them!

Was there a pair you should have broken up with sooner? Maybe the Girbauds?

Do you own a pair that only you could love?

Do you remember that costume house Odds? It was four floors of everything you could imagine. Every time I was there, I’d see this one pair of jeans. And then they closed and sold off everything, and I got them. They have American flag patches, and the waist has to be a 25. They’re just straight up and down. I don’t think anyone could ever fit into them. They’re on the lighter side. They’re Levi’s.

Top three jeans of all time?

1. Definitely the Levi’s 505s. Those have seen a lot. 2. I have a pair of Carhartt jeans that I wear and love. They’re like my uniform – I have them in white black and denim. 3. And then my Levi’s Daisy Dukes. Their holes just keep getting bigger and bigger.

How many pairs do you need to feel like you have enough?

Maybe ten. I like to have options. Sometimes the way you break a jean in, it’s different every time you wear it.

What do your jeans reveal about you and the way you live?

Is there something you do only wearing jeans?

Once upon a time, it would be going out at night. It was head to toe, all denim all the time.

If you had to replace all your jeans with something else, what would it be?

I’d start fresh and do all black Carhartts.